For a while I have been wanting to change the pickups in a couple of my guitars but I also wanted a low output set for my needs which I was having trouble finding at a price I was willing to pay. So I came up with the idea of winding my own, & that’s just what I did. I ordered in a winding machine, the various parts that I needed for what I wanted, and took a wild guess as to how many turns would be right for me.

After a few attempts I got the process down and away I went. My first set of pickups for my Strat turned out to be 4.8KΩ on the bridge, 4.6KΩ on the neck, & the middle was calibrated nicely at 4.4KΩ as a RW/RP unit.
The true test was gong to be what pickups sounded like though, & I was very happy with the result as I have a tight low end to them with moderate midrange, and lots of chime on top. 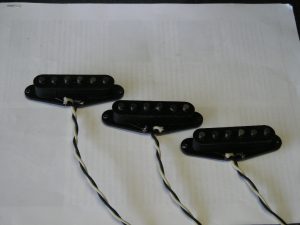 Long story short, I decided to venture into the pickup winding side of things as well. I’ll be sticking to single coils only and putting together sets for Strats & Tele’s as well as individual pickups as needed & I can also custom wind to spec or rebuild pickups upon request. The upside of the pickups is that I now have something to do in between amp builds.

I’m getting things dialed in pretty well with the pickups now so here’s the latest info on what I’ll be offering with them.